The lull in medtech startup fundraising transactions continues from last week, with approximately $93.2M in funding raised across 5 deals. Total fundraising continues to decline from the $446M high seen two weeks ago. 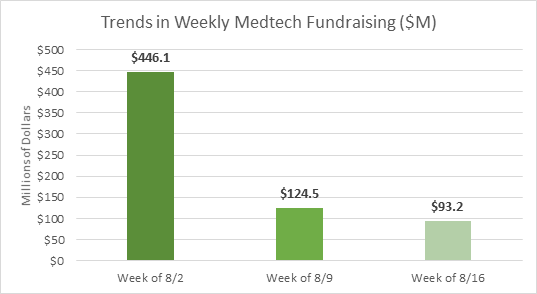 Below are some of the top deals tracked over the past week:

LSI's Medtech Startup Tracker is focused exclusively on covering the innovators changing the medical device landscape. Here are some of the interesting startups we’ve recently profiled:

Israeli-based surgical robotics developer Memic announced that the company will go public later this year through a merger with special purpose acquisition company (SPAC) MedTech Acquisition Corp. The merger is expected to be completed in the fourth quarter of 2021. Prior to the merger, Memic had obtained de novo marketing authorization from the FDA for its Homnis Surgical System – an endoscopic instrument control system indicated for laparoscopically performing transvaginal benign gynecologic procedures (e.g. benign hysterectomy). The merged company will have an estimated pro-forma equity value exceeding $1B, which includes $63M from Memic’s balance sheet.

Neuromersiv is developing a neurorehabilitation platform that combines wearable technology (haptics) and virtual reality (VR) to help patients recover from brain injuries. The VR software is compatible with consumer VR headsets to provide patients with gamified tasks that rehabilitate patients. According to Neuromersiv, this new approach to rehabilitation has the potential to improve engagement and lower costs when compared to traditional rehabilitation therapies. Earlier this year, the company raised $1M from a Seed round of financing, bringing the total funding amount of Neuromersiv to $2.1M. The company is currently working with 11 rehabilitation centres in Australia, India, and Taiwan as part of their initiative to strengthen the clinical evidence supporting the utilization of their platform.

Flow Neuroscience has developed a medication-free neurostimulation device to treat depression. A wearable headset and smartphone application to apply transcranial Direct Current Stimulation (tDCS) to restore activity in the Dorsolateral Prefrontal Cortex and decrease depressive symptoms. According to the company, users of the Flow tDCS headset notice a reduction in depression in under 2 months. Treatment consists of 30-minute stimulation sessions performed 5 times a week for up to 3 weeks, followed by 1 to 2 sessions per week as needed. The company has received the CE mark to commercialize the Flow tDCS in Europe.

Zilia is developing a retinal camera that measures the oxygen saturation of the retina to diagnose and monitor ophthalmic diseases such as diabetic retinopathy and glaucoma. Oxygen is a key biomarker linked to the metabolic responses and pathophysiologies of the eye and brain.  While the device is initially being investigated for use in ophthalmic diseases, the technology can be used in other research fields including cardiology, neurology, and oncology. Key strategics in the ophthalmic imaging and diagnostics market include Alcon, Carl Zeiss, and Topcon.

The device is being touted as the first bioabsorbable stent to treat brain aneurysms. Fluid Biotech’s device features a self-expanding stent design composed of a hybrid polymer-metal that is gradually absorbed into the vessel wall after the aneurysm has been cured. Benefits of this new stent include patients no longer requiring life-long anticoagulant therapy, while minimizing interference with follow-up radiological imaging/testing. In early August 2021, the company announced that it had completed a Seed round of fundraising for $4.7M. Abbott, Boston Scientific, and Medtronic are the top three strategics in the interventional cardiology and vascular solutions market.

Stay connected with our latest posts: